The children’s rhyme makes it seem so simple: first comes love, then comes marriage, then comes the baby in a baby carriage.

Of course this perfect image isn’t always a reality. The hope and expectation is a happy, healthy, bouncing little baby in your arms, but what happens when something, God forbid, goes wrong? Alcohol consumption during pregnancy can lead to many different issues that can hurt both mother and baby, and we strongly urge pregnant women to seek treatment if needed.

For decades there has been published advisory information stating that alcohol is bad for pregnant women. A government warning appears on wine and spirits stating that women should not drink alcoholic beverages during pregnancy because of the risk of birth defects.

How Does Alcohol Affect a Fetus?

Alcohol is a central nervous system depressant that crosses the placenta to go from mother to baby. The immediate effects on the developing fetus include disruption to neuronal development in the brain, and decreased blood flow via the umbilical cord to the baby. This decreased blood flow can lead to diminished growth within the uterus. 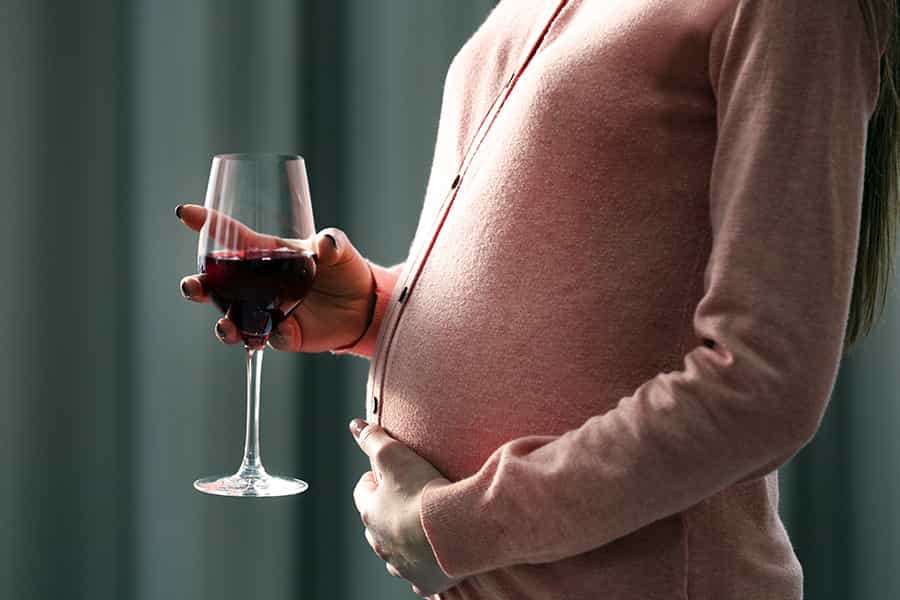 Many women who drink alcohol during pregnancy go on to have a successful live birth of their child. However, even in these cases, MRI images of babies exposed to alcohol in the womb show that these children have small brains and small heads. In addition, many important brain structures are altered, like the cerebellum. The cerebellum contains over half of all the neurons in the brain. Alcohol induced damage to this structure impacts language ability, motor control and fine motor skills, as well as posture and balance. The hippocampus, which is responsible for long-term memory, may also be damaged or decrease in size.

Alcohol may cause damage to or complete absence of the corpus callosum. The corpus callosum is the band of nerve fibers that connects the two halves of the brain. In addition to coordinating conduction signals between both sides of the brain, the corpus callosum assists in social and problem solving tasks. An individual where this is partially or totally absent will lack the ability to have successful social interactions and proper mental processing of problems in their life. Impairment of this structure will also lead to a delay in many developmental milestones of childhood, including walking, talking and reading. Voluntary activities that require coordination of both side of the brain and body will be extremely difficult, due to clumsiness and lack of dexterity. Alcohol induced brain injury may also lead to excess sensitivity to sensory stimuli.

Alcohol may additionally alter the functioning of the pituitary gland and adrenal gland in the central nervous system. The pituitary and adrenal glands typically work together to secrete stress hormones as an adaptive response to extreme physical circumstances or events. The altered functioning of these organs may lead to long term increased vulnerability and risk of depressive and anxiety disorders.

The Two Dreams staff provides the care and support that pregnant women with substance abuse disorders need during their struggle. Please call us today to speak with our empathetic, non-judgmental staff members about your treatment options.