After cannabis, amphetamines are the most widely used illegal drugs in the world, with about 14 to 57 million people using methamphetamine.

Based on the increasing number of drug busts for methamphetamine laboratories in the United States, it is clear that its use is on the rise. 45% percent of users are women, and according to the ongoing IDEAL (Infant Development, Environment, and Lifestyle) study examining the affects of meth use on child development, 6% of women used the drug while pregnant.

Methamphetamine (also known as meth, crystal, and ice) can be put in various forms (powder, crystal, or dissolved in ethanol) so that it can be ingested, smoked, snorted, or injected. It can be made from basic chemicals found in regular stores, but also requires the use of the somewhat restricted substance pseudoephedrine. Despite limitations on the access of this cold medicine, methamphetamine drug makers can still usually obtain it to make crystal meth.

How Does Meth Work?

This drug increases the extracellular concentration of the neurotransmitter ‘dopamine’ in reward regions of the brain, which leads to the feeling of a euphoric high. Although the rush experienced by the body is brief, the drug has a long half-life (10.7 hours) in the body, which is thought to contribute its ability to cause so much neurological damage. Methamphetamine can interact with other neurotransmitters, specifically norepinephrine and catecholamine, and this activity likely contributes to some of the neurological defects seen in regular crystal meth users.

How Can Methamphetamine Affect a Person’s Health?

Long-term meth users may experience symptoms such as anxiety, confusion, insomnia, and mood disturbances. They may also experience increased heart rate, blood pressure, and respiratory rate. The core temperature of a meth user may rise, which is thought to contribute to neurological damage.

Physical signs of use include extreme weight lost, dental problems, and skin sores. A person on methamphetamine may display violent behavior, feel paranoid, and/or hallucinate. Some people have also reported delusions, such as the feeling of insects crawling on the skin. Unfortunately, these symptoms can last for as long as a year after the user’s last use. 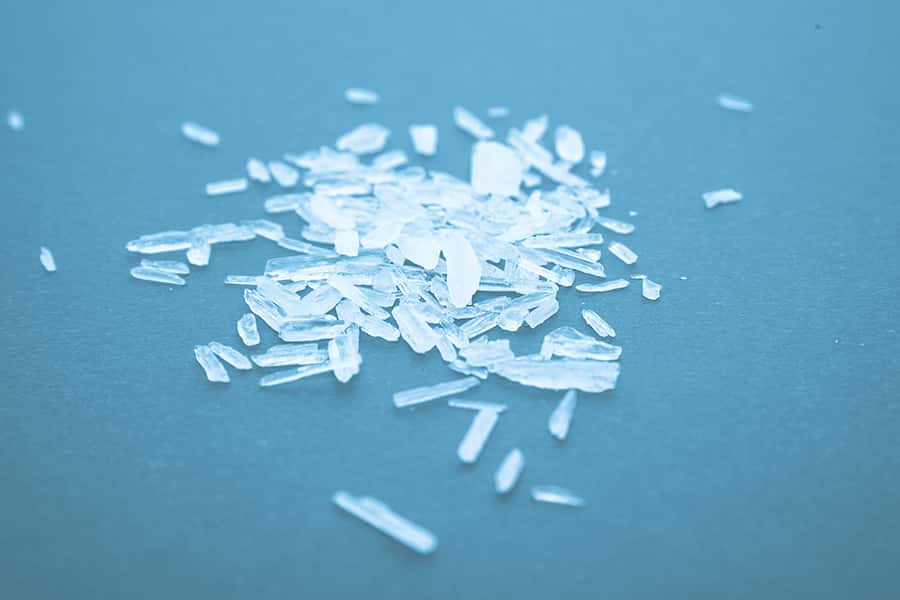 How Does Methamphetamine Affect the Fetus?

Research with pregnant rats exposed to methamphetamine has suggested that the drug causes defects on fetal developmental. Studies looking at infants exposed to alcohol (not meth) have shown decreased transport of iron, biotin, vitamin B6, and polyunsaturated fats, so it was theorized that meth use might reduce the access to some nutrients to the fetus…however, this has not been proven to be the case.

What has been seen in meth-exposed infants is an increased risk for premature birth, low birthweight, and small size relative to gestational age. Meth-exposed infants have also been shown to have high-weight placentas, which is likely a sign that the fetus was oxygen deprived in the womb.

Infants exposed to meth in utero are more likely to pass their meconium (an infant’s first feces) within the uterus. This leads to the increased risk that the infant will aspirate the meconium, which can cause lung disease. There is also an increased incidence of infant brain hemorrhaging and placenta-womb detachment.

Evidence from the IDEAL study indicates that meth-exposed infants have decreased activity, decreased motor skills, and increased stress at birth in comparison to unexposed infants, but these deficiencies were mostly resolved by one month after birth. This does not mean, however, that neurological responses were resolved at one month. More in-depth research is needed to understand the effects that meth has on fetal development.

Why Do Pregnant Women Continue To Use Meth?

Methamphetamine users experience a behavioral modification pattern called weakened inhibitory control. This behavior has been attributed to the changes in grey matter content seen in the brains of meth users. They are often incapable of stopping habitual behaviors, even those that are completely useless or harmful. This contributes to a person’s inability to stop meth use despite being pregnant and despite the detriment they are causing to their bodies.

Kids that were exposed to meth in utero have reduced executive control, meaning that they have problems completing tasks that require planning, organization, memory, and time management. In support of these observations, MRIs of their brains have shown defects in cognitive, memory, and attention functioning. They often display aggressive behaviors toward others and have problems getting along with their peers. The link between in utero meth exposure and cognitive, memory, and attention deficits in kids is not entirely certain because this information did not come from carefully controlled studies. These children are at greater risk for neglect, and they might even become exposed to the toxic chemicals used to make methamphetamine in their homes, so there are other possible explanations for their altered brain functioning.

What Should a Pregnant Meth User Do?

Quitting is important for the health of both the infant and the mother. Quitting as soon as possible can reduce some of the potential risks (low birthweight, placental detachment, meconium aspiration, etc.) associated with use. Meth addiction is one of the most difficult addictions to overcome: many have relapsed early in the course of treatment so calling an expert addictionologist and getting help quickly is highly recommended.